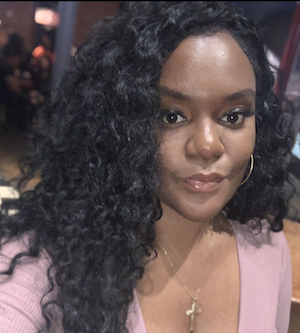 Tori Jonique Thomas grew up in Onslow County and showed her vocal talent very early. Now, as she completes her final semester at UNCW, she contemplates just where she’d like her talent and interests to take her. In the meantime, this self-professed “Puccini girl” is also doing social media work for Opera Wilmington, demonstrating her skills in that area as well.

I grew up in church. My grandma was quick to put me in a choir and then have me solo because she found out I could sing at an early age. I got into opera specifically when I enrolled at UNCW. It was a whole new world!
Note: Tori is currently singing in the choir at St. Paul’s Episcopal Church in Wilmington.

Why did you pursue voice studies at UNCW?

So, musical theater in high school?

I have sung since the fifth grade, but my first big role was Éponine in Les Misérables. I was a freshman in high school and I was terrified. But that’s when [the singing bug] bit me.

I also did Aida [the musical] and a couple of plays.

I am a mezzo-soprano but can sing higher notes as well.

You graduate this semester. What’s ahead for you?

I would love to go back to school in vocal performance: musical theater and opera performance. And I’d love to pursue a career in theater. 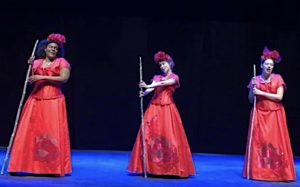 Tori, at left, as one of the Three Ladies in UNC-WOOP!’s production of The Magic Flute.

What have you participated in at UNCW? What experiences have meant the most to you?

I’ve been in every single WOOP! [UNCW Opera Outreach Program] program while I’ve been here; the first was Carmen, performed in Southport. I was in the ensembles for Opera Wilmington’s Amahl and the Night Visitors and La Bohème. 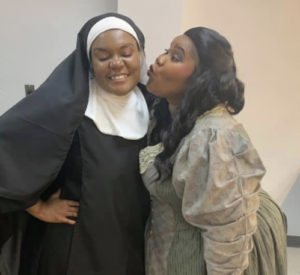 Tori, costumed for her ensemble role in Opera Wilmington’s La Bohème, gets a quick vote of confidence from Jemeesa Yarborough, who sang the role of Mimí.

The most important experiences have been singing in two Caterina Jarboro Symposium master classes. I feel so closely connected with her: to be an African American woman in that industry. The first master class was with Jemeesa Yarborough and the second was with Joshua Conyers. Josh helped a lot with grounding during a performance. I never thought I had stage fright, but he gave me some good pointers to feel more comfortable.

What are your favorite composers and what roles would you most like to sing?

As far as opera goes, I absolutely love Puccini. Puccini makes music that cries in the best ways. It’s so close to how my emotions feel. My favorite Puccini opera is Turandot. I would love to sing the aria “Signore, ascolta!” [Sung by the slave girl Liu]

I am also a lover of Schönberg. Among my favorite Schönberg compositions is a cabaret piece, “Schenk mir deinen goldenen Kamm” (Give me your golden comb). I love the Jessye Norman recording of that.